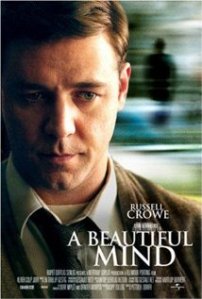 A Beautiful Mind tells the  story of the schizophrenic Professor John Nash, mathematical genius and Economics Nobel laureate. The film is a prime example of the problem with the biopic genre; they fail to break free from a very “and then, and then” structure. The problem with the film is not in the performances or nature of the story but in its actual writing.

A Beautiful Mind is a good film, but it’s one of those film which deserves to be so much better than it actually is. Except for a stellar performance by Crowe, everything else in the film seemed to fall short of the potential that the story was calling for. A Beautiful Mind is one of those films which benefits from the viewer knowing what they are watching before hand. As a first time viewer I knew nothing about the plot, film or story of John Nash. This made the slight twist (it’s more of a reveal if you know Nash is schizophrenic) quite surprising and thus enjoyable. But once this turn was made in the plot, there was very little excitement or intrigue. The plot bumbles along until the final resolution, which is admittedly heart warming and satisfying.

Russel Crowe plays the role of the socially awkward and mathematically obsessed  Princeton scholar. His performance is a brilliant display of sincerity and believability. Crowe’s performance captured my attention and drew me in to the character. I quickly became intrigued by the awkward young Nash. However as the film progressed I moved from feeling curious to feeling genuinely sympathetic and concerned for him. Such a performances was necessary if there was to be any degree of success to the film. The viewer is plunged into a pit of frustration and disappointment each time Nash begins to lapse into his schizophrenic moments. This ability to control an audience and take them on an emotional journey is testament to the skill of the actor.

A Beautiful Mind does a great job of putting the viewer in the perspective of someone suffering with schizophrenia, but fails to hold ones attention to the end. The first half of the film is filled with promise. Once the revelation of Nash’s schizophrenia is made, there is little reason not to fast forward to end and watch the ‘happy ending’ that unfolds.